Finland:  In May 2019, the Association of Cancer Patients in Finland is campaigning for awareness of gynecological cancers. Earlier in the Spring, the Association conducted a survey on the late effects of gynecological cancers, the need for support and the importance of rehabilitation. 133 women answered the questionnaire. Most of the respondents were suffering from ovarian cancer. 28 percent suffered from cervical cancer. Approximately 30 percent of the respondents had had a gynecological cancer reoccur at least once. More than half of the respondents felt that adverse effects had a significant impact on quality of life. The survey found that after the end of cancer treatments, the most common adverse effect among respondents was neuropathic symptoms. Exhaustion, pain and hormonal effects were also common. One third experienced difficulties in remembering and concentrating. When asked from whom more help or support would be needed after the cancer treatments. the most frequent answer was either the doctor or a psychologist. 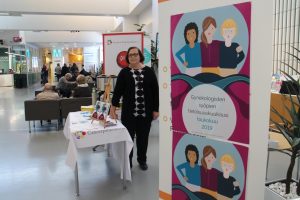 On the same day, we hosted an event, where we heard a lecture by Professor Ulla Puistola on gynecological cancers and the side effects of their treatments. In addition, we heard about the experiences of the patients, and had a panel discussion of late effects. The event culminated in a stand-up comedy routine by a member of the Gynecological Cancer Network. 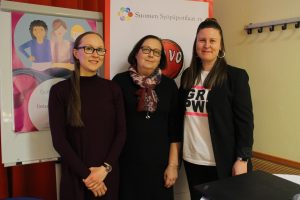 The volunteers involved in the campaign wrote an opinion piece, which was published in Finland’s largest newspaper. The piece was dedicated to discussing the side effects of cancer treatments, as well as wider and longer-lasting support for the management of late effects. Interviews with gynecological cancer patients have been published in several online media.
The campaign will continue until the end of May but we are very pleased with the publicity we have received so far. We hope our campaign is the starting point for a broader discussion of gynecological cancers and their late effects. 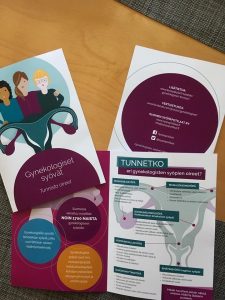