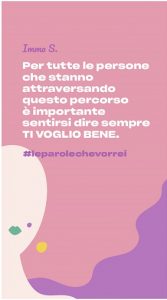 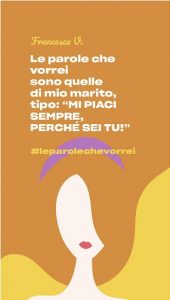 Italy – Acto Onlus – Social Media campaign: “Together we can find a new way to talk about cancer”

Together we can find a new way to talk about cancer

These are the results of the  “Words I would like to listen” (in Italian #leparolechevorrei) campaign  on social media, really good if compared to the numbers of ovarian cancer in Italy: 50.000 women living with it, 5200 new diagnosis/year.

We were driven by the suggestions of a patient group: women with ovarian cancer would like to  talk about cancer in a different  way. The word used up to now:  “battle”, “warrior”, “silent killer”, sketch a military language that most of our patients dislike.

We realized that words are important, they can modulate emotions and change behaviours. They can kill or save.  Therefore we launched a social media campaign to ask patients and caregivers to tell us how to talk to a woman living with ovarian cancer.

Two video in motion graphics were produced: the first video launched a “call to action”, the second one reported words and sentences which patients and caregivers think can be more helpful  and soothing.

Here is the “call to action” video . Here you can find the second video: