Sweden: About the campaign 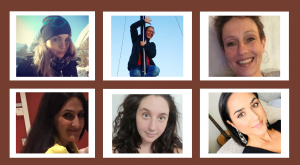 Picture 1. The strong women who have been working with this campaign

This campaign contains a lot of activities that in turn contain several different parts. In subsequent chapter, each activity will be presented, but in the list below you can see which activities we mainly worked with.

The visitor can read a lot about ovarian cancer on the website, for example;

Picture 2. In Sweden 700 persons are diagnosed with ovarian cancer each year. 550 persons die each year as a result of the same disease.

Information about ovarian cancer including symptoms, about doctor´s examination, investigation, which support that is available for patients as well as their relatives. The visitor on the website can also read “patient stories” 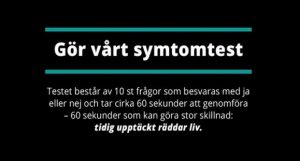 Make our symptom test for ovarian cancer. And a little bit about the test.  Ask an expert. During May and June anyone can submit their questions about ovarian cancer to our website. Christer Borgfelt one of Sweden’s foremost experts will answer all the questions.  If they wish they can submit the questions anonymously, or with an alias. On the website you also can see the two movies with ovarian cancer survivors. You can read more about the movies at page 5 in this document. You can also order materials such as posters stickers, postcards on the website (see page 3 for information about the material). Patient stories with women suffering from ovarian cancer can also be read on the website. They also find the link to the YouTube playlist on the website (see page 5) and pictures of the material and from the campaign. We share other useful links on the website, for example, information about the health care in Sweden. Material One of the most important activities in this campaign has been to reach out with our important purpose to teach women the symptoms. We have worked with this in different ways, for example, we have developed physical material like posters, postcards, decals and information letters about the campaign. Picture 4. Stickers with the symptoms of ovarian cancer.

Some of the material in the campaign: 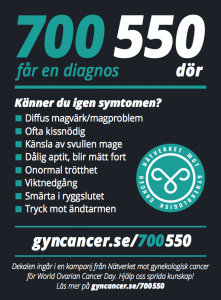 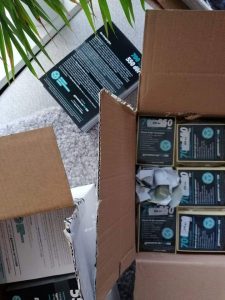 We have urged the public to send the postcards with the message to politicians or people you like. Regarding the decals, we have asked the public and companies to put them on mirrors in bathrooms, in fitting rooms in shops or in staff spaces or everywhere where you get permission

All primary care centers in Sweden but also gynecology receptions have got the material by mail. More than 200 centers have also received physical material. In the e-mail we also thanked them for taking care of ovarian cancer patients in a good way, but we also paid attention to the Swedish national care program for ovarian cancer.
All parliamentary party’s leaders have received material as well as several politicians at regional level. Every year in April, the network against gynecological cancer organizes “gynecological cancer days” and 2019 we were in Stockholm, Gothenburg, Malmö and Linköping. The evenings include presentations from doctors, nurses and researchers. The lectures this year were about research, rehabilitation, self-care, palliative care and prevention. We reached an audience of people in common, patients, relatives and healthcare professionals. This year we had 700 in the audience. All these received a bag filled with information on ovarian cancer and about the campaign.

We have seen our material at several gyms, sports arenas, shops, schools but also encountered the material at gynecological receptions and health care centers. We are extremely thankful for those who spread our message!

It is not enough there; we have also talked to so-called influencers and companies around Sweden and several influencers on internet have shared material about the campaign in their social medias. The discussions with more influences continue even though 8 may has passed.

Newspapers have also made advertisements with our message 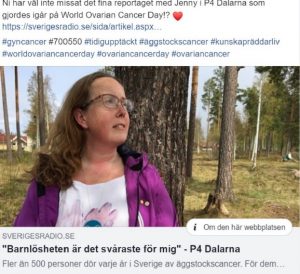 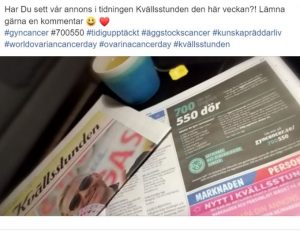 Picture 6. About one of the reportages in one radio channel

Picture 7. An advertisement with our message in one newspaper

Picture 8. One article about ovarian cancer in one big paper which readers are women

Movies
We have also made two films in this campaign, both are 1.10 minutes long, but they have been marketed slightly differently. One of the films we have marketed hard in social medias, while the other was finished after 8 May so we will market it now. Both films have the same message, but the difference is the number of women participating in the films.

When we did these films, we got a lot of legal help (free of charge for the good will of course) regarding the GDPR so finally everything was approved, and women could submit their photos or movie clips to us if they wanted to participate in the movie.
We chose not to edit the pictures anything, so they are just like those when the women submitted them, quality and pruning we have not bothered about, but we think this has been part of the charm. The numbers presented in the movies are age at diagnosis and this we have put in order to show that ovarian cancer can affect all women regardless of age.

We have also made a playlist on our YouTube channel where we have listed all the films, we have posted about the ovarian cancer symptoms, patient stories, heredity and lectures we shared about ovarian cancer. Examples of lectures are previous webinars that is related to ovarian cancer.

Goals and achieved goals
We have had different goals for the different activities, but the main goal has been to increase the knowledge among women about the diffuse symptoms of ovarian cancer and to be a voice for women affected by ovarian cancer.

We have tried to have some measurable goals, and, for example, we wanted at least 90,000 views of the website between May 8 and September 30. On 20 May we had reached more than 10,000 views. We are extremely proud of what we have achieved so far.

When it comes to our films, it is incredibly difficult to measure how many we reach because we share them on social media and movies on Facebook become best if you do not have them via YouTube, therefore the sharing on social media has been such that it is difficult to know how many people who have been taken part of the films. Our Facebook posts at 8 May received 34 000 views.

The symptom test has been completed 2930 times on May 20 and we want at least ten thousand to carry out the test before the end of September.

We will continue the work

Although May 8 is passed, we are working right now with continued marketing of the campaign. We work mainly through social media, but we also continue to distribute material physically. Our aim is also to find more influencers and companies willing to share the important information about the diffuse symptoms of ovarian cancer.
In the symptom test, we discovered that we should have had a specific text if you only answer the question of genetics and we are working with that right now.

All comments we have received so far like comments on the material, the website and the films has been incredibly positive, and we are overwhelmed by all positive response. There have been so many emails in which women said they didn’t know the symptoms and wanted this information before they got sick and that they should have listened to their bodies. It is together with affected women we do this; we do not want anyone to get ovarian cancer. 550 women die each year from ovarian cancer, that is 550 to many.