UK: On 8th May for World Ovarian Cancer Day, Ovarian Cancer Action was able to shout louder than ever before about the disease and its symptoms, reaching millions of people with potentially life-saving information.

With the help of 160 incredible volunteers, the charity handed out 33,000 white roses in 25 locations across the UK. Each rose had a symptoms tag attached and represented a woman currently living with the disease in the UK.

Cary Wakefield, Chief Executive of Ovarian Cancer Action began the day by joining Anna Szalay on the BBC Breakfast sofa. Anna, 21, spoke eloquently about her own experience of diagnosis, and Cary explained why earlier diagnosis is so vital if we’re to see an improvement in survival rates in the UK.

Politicians (including Prime Minister Theresa May) in England, Scotland and Wales united behind the campaign. They wore white roses and pledged their support for earlier diagnosis.

A woman dies from ovarian cancer every two hours in the UK — yet the diagnosis is often slow and treatment options limited. What’s more, the UK has one of the worst ovarian cancer survival rates in Europe. Early detection is our best means of improving these survival rates, yet 82% of UK women are unable to name the four main symptoms of ovarian cancer.

Ovarian Cancer Action staff and volunteers were spotted handing out roses at locations across the UK from Bristol to Birmingham to Belfast — and everywhere in between. Supporters helped spread the word online by sharing photos of their roses on on Twitter and Instagram, using the hashtag #WOCD. Our voices are louder together and it was incredible to see so many of you sharing potentially life-saving information with your friends and family this World Ovarian Cancer Day.

World Ovarian Cancer Day is an amazing opportunity to shout as loud as we can about the disease and its symptoms but it’s just the tip of the iceberg. All year round our scientists at the Ovarian Cancer Research Centre, The University of Oxford and beyond are working to find the next breakthrough in ovarian cancer research. Your donation will support the work they do each and every day. Donate now 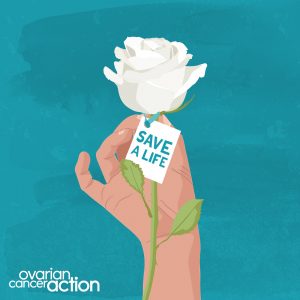 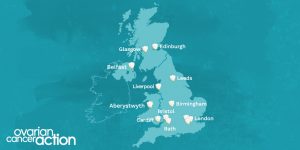